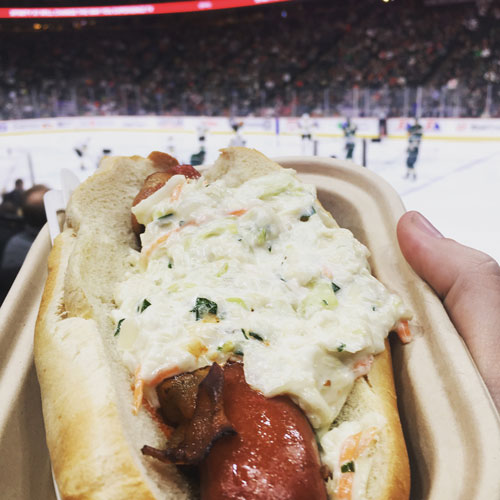 My trip to Minneapolis, Minnesota welcomed me with -5 degree weather and why not? When you travel you should travel like a local. This analysis of Xcel Energy Center in St. Paul is dedicated to the area’s favorite and most famous local son (may he rest in peace). Below is my visit to a Minnesota Wild game as described by five Prince songs.

Life Can Be So Nice

Have you ever talked to someone that is just a little too nice? It took about 20 minutes in a Lyft to get from downtown Minneapolis to the Minnesota Wild’s Xcel Energy Center in St. Paul and by the time we reached our destination I think the driver was ready to adopt us as family members and give us the shirt off his back for warmth. The week was full of frigid temperatures and crappy weather. WHY IS EVERYONE SO HAPPY HERE!?!?

Did you know St. Paul Minnesota was named after a chapel that was established in the area by a Catholic French Canadian minister? Why no I did not overly nice and educational Lyft driver.

Walking into the stadium was a bizarre sound experience. I don’t know if it was the acoustics or how the seats are spaced away from the entrance but I literally couldn’t hear any game action in the outside concession area until we stepped up to the tops of the aisles. You usually can hear the crowd, announcers, game action, etc. Not here though. Nothing.

Played after every Minnesota Wild goal. What a city.

During a timeout in the game, the every-popular kiss cam started up on the jumbotron and I counted three out of five men sporting mustaches. Seriously it was like Matt Hamilton appearing over and over again.

My food of choice was a bacon wrapped hot dog with coleslaw and Louisiana hot sauce. The dog was delicious with plenty helpings coleslaw. It could have used a little more hot sauce and the bun was unspectacular. It gets an A+ for creativity though.