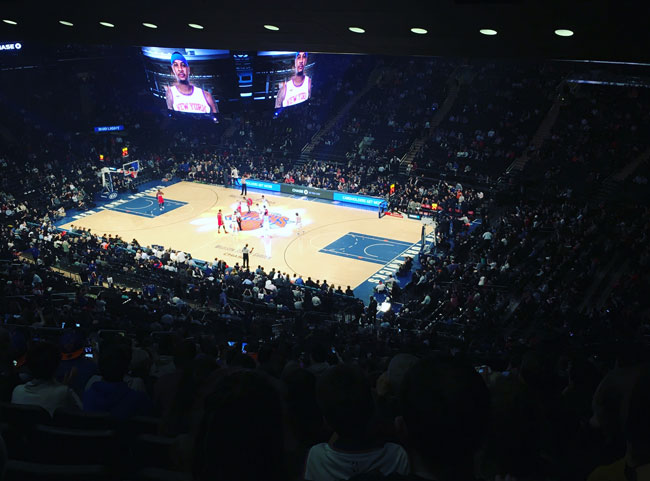 I finally arrived at the Mecca. After living in New York for a full year, I had yet to venture to basketball’s holiest grounds. “Whoa”, I thought. “A good team played here once long ago”. A distant memory. I could feel the history. I also felt the pain of waiting in a 20-minute security line before finally scanning my ticket.

But hey, you can’t beat a stadium in the heart of Manhattan. Is there a better location for pregame/postgame festivities in the world? The stadium’s architecture is interesting. Very 70’s. It has a sort of bizarre catwalk traversing over the nose bleeds where we were sitting, but surprisingly it was still a decent view way back in the corner.

We were on CELEBRITY WATCH the entire game. It ended up being the sort of CELEBRITY WATCH you would expect for a Thursday night game and a 30 win team. Jason Long was the highlight. It’s been a rough year.

A damn good cheeseburger, MSG. Well done. Literally, it was well done, but still worth it. Give it a shot.

Like an Eagles fan seeing James Dolan’s blues band as an opening act, I was forced to try something I didn’t want to try. The lady at the concession stand thought we ordered fries with our burger. We did not. But I’ll be damned if I’m going to turn down some hot greasy potato skins. I should have turned down some hot greasy potato skins. They were lukewarm and flavorless. I don’t even like salt on my fries and I wanted salt on my fries.

Blue Point Brewery has made some solid local stadium deals which I’m OK with. I had their Toasted Lager which beats the usual Bud/Miller/Coors choices. I don’t remember how much it was. Probably about as much as a 5-year Carmelo Anthony contract extension.